Family In Need Of Service Dog 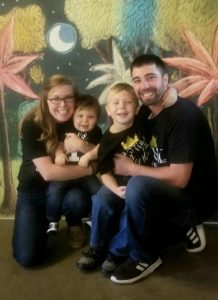 Since the beginning of the pandemic, the meltdowns have seemingly come out of nowhere for Chaise Clouser.

One minute, the 6-year-old is fine.

The next, he’s upset, inconsolable and combative as he seeks sensory input to comfort him from things that overwhelm him and may not be obvious to his parents, Justin and Ashley Clouser, of Shelocta.

Diagnosed with autism and ADHD at age 2, the COVID-19 pandemic and subsequent shutdown caused Chaise’s world to be “turned upside down and shaken,” Ashley said.

And now the Clousers are asking for help from the community as they fundraise to provide Chaise with a tool they believe will help him cope with the obstacles of his diagnosis: an autism assistance dog.

Chaise’s behavior “was manageable until COVID,” said Ashley, who herself is a behavior specialist. He attended kindergarten in the Indiana Area School District, as well as a variety of therapy programs and other organized activities, throughout the week. They had a routine.

In the second week of distance learning, Ashley said Chaise “shut down.” Incidents of biting, hitting and kicking started to increase in frequency and intensity.

“Before COVID, Chaise could be easily redirected” with methods such as hugs, squeezes or tickles, said Justin.

But those methods were no longer enough. The couple said they were being injured as they tried to calm and restrain him during a meltdown.

So to protect themselves, Chaise and his younger brother, Conner, who will turn 2 in October, he was admitted to UPMC Western Psychiatric Hospital in June, where he spent 15 days undergoing inpatient treatment.

Having Chaise admitted to the hospital was something the Clousers said they always thought was a possibility, but they didn’t think it would happen by age 6, Ashley said.

His journey to a diagnosis began when he was about 1, when the Clousers noticed he wasn’t reaching childhood milestones.

He was evaluated by Children’s Hospital at 18 months in January of 2016, receiving a diagnosis of expressive language disorder, as autism isn’t normally diagnosed before age 2. But the initial diagnosis opened the door for early intervention. Subsequently, an autism diagnosis — something they had long suspected — was confirmed later that year.

The Clousers “tried to get as much social interaction as possible” for Chaise without overwhelming him, Justin said. Through the use of a communication device, he learned to talk.

But his progress was halted by the pandemic.

When he was admitted to the hospital, it was hard on everyone, especially Chaise, who Ashley said didn’t understand all the visitation rules related to the pandemic.

Only one person from the family could visit — and it had to be the same person — and they were only allowed there three days a week.

With some help from state Sen. Joe Pittman and his wife, Gina, who had contacts at the hospital, Justin was also allowed to visit Chaise, but only separately from Ashley.

After two weeks, Chaise was discharged.

THE IDEA for the autism assistance dog came from a friend in a similar situation whose family recently finished the fundraising portion for a dog for their autistic child.

When Justin and Ashley heard about it, they thought it would be a good fit for Chaise, who loves his family’s dogs.

One of the older dogs, a German shorthair pointer named Swoop, is of special comfort and tries to help calm him during meltdowns by laying with him, on him, or licking his face as a distraction.

“I feel like a trained dog will be that much more beneficial to Chaise,” Ashley said. “I hope he can assist my son in providing him with the best quality life.”

Justin hopes the dog will be able to help with Chaise’s behavior so he can cope in school and in all the other situations he encounters.

The journey to obtaining a dog is not a fast one.

The application process alone took weeks as they gathered references, filled out paperwork and got doctors to complete health forms.

They were approved for a dog on Aug. 28.

The Clousers have set a fundraising goal of $18,000 to help with fees taken by different fundraising platforms.

Other fundraisers are in the works, including a gun raffle and money raffle organized by officials at Horizon Stables in Apollo, where Chaise attends horse therapy.

Checks can also be mailed to 4 Paws for Ability in Honor of Chaise Clouser, 253 Dayton Ave., Xenia, Ohio 45385, but note that Chaise’s name must be on the memo line of the check.

There is a waiting list of around two years for a dog, as they are bred and trained based on demand.

The family started fundraising upon approval, and have collected nearly $2,000 so far.

Chaise’s dog will be trained in tethering, behavior disruption and sensory input.

According to 4 Paws for Ability, the dogs are trained to work with the child and an adult handler or parent.

To disrupt behavior, a dog is trained to respond to a parent’s command or to the behavior of the child and to redirect attention, for example, by placing a paw on the child, or comforting them with pressure by laying across their lap. The tethering feature helps keep children from wandering.

But Justin and Ashley believe the dog will provide another important aspect as well: companionship for at least the next decade.

“Above all, the dog will be Chaise’s companion and safe space to cope with his feelings and frustrations,” Ashley wrote in the introduction for the fundraiser page.

The Clousers said they are thankful for support they have already received and for the donations to come that will help make their dream of a service dog for Chaise a reality.

“Chaise may be different, but not less!” Ashley says on the fundraising page. “His smile is extremely infectious and his love for life is contagious! … Your contribution will make an impact, whether you donate $5 or $500. Every little bit helps in assisting Chaise to obtain his goal of receiving his very own service dog!”