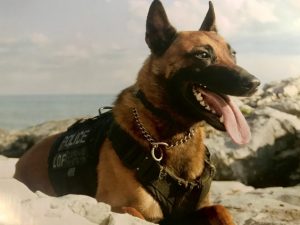 Police Service Dog Six was No. 1 in nabbing a suspect over the weekend in Oshawa.

Durham Regional Police were called around 10 p.m. Sunday to the Simcoe St. and Rossland Rd. area for reports of a man with a gun.

Cops say a member of the K-9 Unit located a suspect, who fled on foot but was quickly caught by Police Service Dog Six.

The man was bitten during the takedown and was treated in hospital for minor injuries, police say.

A starter’s pistol was allegedly located on the suspect along with about $2,000 worth of cannabis.

Lucais Dayron, 18, of no fixed address, has been charged with possession of cannabis for the purpose of selling and fail to comply.