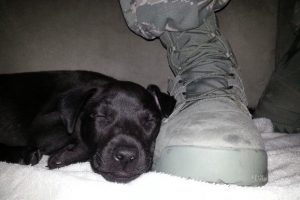 Regional and service-specific policies banning aggressive dog breeds on military bases have been a source of consternation and controversy for years. But a new provision in the Senate version of the next defense policy bill aims to clear up the confusion.

An amendment in the fiscal 2021 National Defense Authorization Act passed by the Senate would require the secretary of defense to establish a single standardized policy for the whole military governing dangerous dogs. The new policy, which would be presented within 90 days of the bill’s passage, would be breed-neutral. That’s in contrast with current policies, which tend to focus on certain “aggressive” breeds, such as pit bulls.

The new policy would also need to be “consistent with advice from professional veterinary and animal behavior experts in regard to effective regulation of dangerous dogs,” according to the language of the bill.

The current array of policies governing dogs on base highlights the confusion. According to the Air Force’s standardized pet policy, dogs of any breed deemed “aggressive or potentially aggressive” are off-limits on base unless the animal is certified as a military working dog or has special approval from the base commander.

“For purposes of this policy, aggressive or potentially aggressive breeds of dogs are defined as a Pit Bull (American Staffordshire Bull Terrier or English Staffordshire Bull Terrier), Rottweiler, Doberman Pinscher, Chow and wolf hybrids,” the policy reads. “Prohibition also extends to other breeds of dogs or individual dogs that demonstrate or are known to demonstrate a propensity for dominant or aggressive behavior.”

These behaviors include unprovoked barking and snarling, biting or scratching people, and escaping confinement to chase people.

The Army  has base-by-base restrictions, many of which limit not only the kinds of dog breeds that can be kept but also the total number of pets. The policies typically name the same breeds cited in the Air Force policy as restricted from living on base.

In 2012, Marine Corps Base Camp Lejeune, North Carolina, moved to end its grandfather policy governing pit bulls, rottweilers and wolf hybrids, requiring base residents to give up these dogs or move off base.

Owners of mixed-breed dogs and breeds banned in some places but not others, like Chows, are especially likely to take issue with current policies, and to face challenges during permanent change-of-station moves to locations with different rules. A 2013 Change.org petition from the organization Dogs on Deployment calling for a standardization of dog policies collected nearly 45,000 signatures but ultimately did not lead to a major policy change.

The initiative apparently got new legs, however, when the president of the American Bar Association, Bob Carlson, wrote to the Senate Armed Services Committee in 2019 about the matter.

“Enacting a consistent pet policy applicable to all installation housing, regardless of service or privatized provider, can balance diverse command interests in safety and security while also improving the morale and welfare of the service members and families affected by the policy,” he said at the time, calling for a breed-neutral, uniform policy for those in military housing.

According to the current legislation, the policy would have to be implemented within 180 days of the NDAA becoming law and would “include strategies for implementation within all military communities, [and] for the prevention of dog bites that are consistent with the following best practices: Enforcement of comprehensive, non breed-specific regulations relating to dangerous dogs, with emphasis on identification of dangerous dog behavior and chronically irresponsible owners.”

It would also provide for “investment in community education initiatives” that would support pet care best practices and owner responsibility.

The House must still pass its version of the defense policy bill and reconcile it with the Senate version before it continues to final passage and goes to the president to become law.