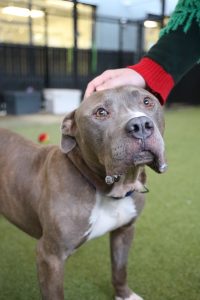 Donald Morehead, a Real Change vendor for more than 20 years, says he runs into problems “all the time” when would-be landlords learn he has two blue nose pit bulls.

“All they know is what they see on TV,” Morehead said, “which is all negative.

“Whenever you go to a rental project, they ask if you have an animal,” he said. “As soon as you say pit bull, it’s ‘Oh, well, we don’t allow them.’”

Rottweilers, Doberman pinschers, boxers and other breeds have all been typecast as ferocious attack dogs over the years, but perhaps none is more notorious than pit bulls. Their typically strong builds and reputation as fighting dogs have not only stoked public fear but also led to breed-specific bans against them, especially in housing.

Ace the pit mix plays with a human, whose hand is seen holding a squeeze toy which Ace bites down on
Ace, one of the pit mixes currently waiting to be adopted.
The Seattle Housing Authority (SHA), for example, which operates nearly 8,500 apartments and rental homes in the city, says in its pet policy that “pitbulls or pitbull mixes are specifically prohibited and shall not be allowed in any SHA community.”

For people experiencing homelessness, the bans can be obstacles to finding shelter at all. Morehead said he was nearly turned away from a boarding house on Capitol Hill several years ago because of his pit bulls, Optimus Prime and Pandora. He ultimately made a case to the property manager that his dogs were better trained than other pets in the building and helped him manage his post-traumatic stress disorder.

As Morehead sees it, breed-specific restrictions represent “a stereotype and racism toward the dog” because they judge an animal by how it looks rather than how it acts.

Black man with close-cropped hair, wearing blue dress shirt, blue-and-yellow tie, and yellow vendor’s badge, speaks while pointing
Real Change Vendor Donald Morehead gives a vendor orientation training in 2017. He has been turned away from housing because of his two pit bulls.
A new bill in Congress would begin to address that concern by forbidding breed bans in public housing. The Pets Belong with Families Act, House Bill 5828, would amend federal housing law so that housing agencies could ban dangerous dogs and other animals based “on specific behaviors or actions by the animal and … not based on the breed of the animal.”

The change would apply only to public housing units and would not affect other federal housing programs, such as the Housing Choice Voucher Program (formerly Section 8), that offset payments to private landlords.

U.S. Rep. Adam Schiff (D-CA), who introduced the legislation in November, told Real Change that his bill “would put an end to overly broad breed-specific pet restrictions in public housing, which force many low-income families and individuals to make the impossible choice between their beloved companions and secure, affordable housing.”

Schiff’s office said the senator worked on the bill with the American Society for the Prevention of Cruelty to Animals and the Humane Society, which have endorsed the legislation. The office said the bill is limited to public housing because Congress lacks authority to regulate private landlords.

Jessica Simpson, senior public policy specialist for the Humane Society, said that while good data isn’t available for how many local housing authorities have breed-specific bans, it’s common for landlords to limit pets by size or breed. The restrictions can not only prevent people from finding housing but also force individuals and families to abandon their pets.

“A shortage of affordable and available housing supply has made pet ownership an obstacle for many families,” Simpson said, “and historically, housing insecurity remains one of the top reasons that pets are relinquished to animal shelters.”

Large dogs and pit bull-type dogs tend to remain at shelters the longest, she added.

“I have run into breed restrictions in public housing, especially in terms of temporary or transitional housing,” said Bri Sherman, a resource navigator at Seattle Veterinary Outreach, which provides social services and veterinary care to unhoused people and their animals. Emergency and long-term shelters in particular, she said, place limits on specific breeds or impose bans on so-called “protection dogs,” which Sherman described as “dogs that we as people qualify as scary-looking.”

SHA, for its part, said its breed ban hasn’t caused many major problems, such as residents being evicted or having to give up their dogs.

A pit mix dog looks sweetly up at a human, whose pant leg is shown in the frame.
Felicia, one of the pit mixes currently awaiting adoption.
“This is not much of an issue at SHA,” said Kerry Coughlin, the authority’s director of communications. “We very rarely evict residents and, looking back several years, haven’t had any due to a pet violation. We don’t have records on residents giving up pets that violate the policy.” As for Schiff’s bill, Coughlin said, SHA “will amend our pet policy if the legislation passes.”

Sherman, however, suggested SHA’s data fails to reflect pet owners who don’t bother seeking housing because they expect to be turned away. Unhoused people who have restricted dogs, she said, “are being advised away from them by case managers like myself who know they’ll be turned away once they get there.”

Nor are many people willing to consider giving up a beloved pet to find housing.

“People are very willing to sleep in their car versus giving up their dog,” Sherman said.

For anyone, but especially vulnerable people, pets can be a lifeline, said Vickie Ramirez, who coordinates the One Health Clinic, a collaboration between the University of Washington and Washington State University that provides health care to youth experiencing homelessness as well as their animals. Human–animal bonds, she said, can help give individuals a sense of purpose and motivation.

“I’ve heard of, like, ‘I didn’t commit suicide because I knew I had to take care of my animal,’” Ramirez said, “or, ‘I didn’t engage in some kind of drug use, because I didn’t want my dog to see me in that situation.’”

The closeness of those bonds mean people sometimes turn down potential housing if it risks separating them from their pets, said Marti Casey, president of the board of Doney Coe, which provides free veterinary care to people who make up to twice the federal poverty limit.

“People will stay on the street, in the elements,” she said. “The only other option is that they give up the family member.”

In some cases, animals that might violate breed or size bans can qualify as emotional support animals or more specialized service animals. Morehead said his pit bulls, for instance, are trained to recognize his PTSD symptoms and “bring me out of it” by pulling on his arm or jumping on his chest, which has allowed the dogs to qualify as service animals.

“If they find out he’s a companion and a service dog and he’s actually trained,” Morehead said, “nine times out of 10 it changes.”

While the Pets Belong with Families Act would remove breed-specific bans from public housing, it would allow size limits to remain in place. That could limit the practical impact of Schiff’s bill, as many commonly prohibited breeds would nevertheless exceed existing size limits at housing authorities.

King County Housing Authority (KCHA), for example, limits dogs to no more than 18 inches at the shoulder and 25 pounds in weight, while SHA limits dogs to 35 pounds. Morehead’s pit bulls, Optimus and Pandora, weigh 82 pounds and 91 pounds, respectively. If they weren’t service animals, they would be prohibited by both agencies even if Schiff’s bill were to pass.

Underlying breed bans, generally, is the question of whether restricted breeds such as pit bulls are in fact more dangerous. According to James Ha, an applied animal behaviorist and emeritus research professor at the University of Washington, it’s a more complicated question than it might seem.

“The most common dog to get bitten by is a pit bull,” said Ha, who opposes breed bans, “but that’s because it’s the most common dog in the United States.” Adjusting for dog populations, dachshunds are statistically most likely to bite veterinarians, he said. “Going into someone’s house or property? Cocker spaniels are number one. They’re very territorial, very protective.”

While broad temperamental differences do exist between dog breeds, they’re poor indicators of any individual dog’s behavior — particularly when it comes to pit bulls.

In part, that’s because nobody agrees precisely on what exactly a pit bull is. Between five and eight separate breeds are commonly referred to as pit bulls, primarily due to shared appearances.

Adding to the confusion is that while pit bulls were once bred as fighting dogs, modern breeding practices have diverged. A subset of breeders still raise dogs for fighting, but others have selectively bred pit bulls as low-key family dogs with a sweet disposition. Such selective breeding, Ha said, could mean there are now two different pools of pit bull-type dogs — some more aggressive, others more subdued.

If there are two emerging genetic lines, they can’t easily be distinguished. So when dogs bred for fighting are surrendered to shelters and then adopted, a dog’s new family often has no way of knowing the dog’s background without an expert’s assessment.

Ha acknowledges that dog bites are a major problem.

“I think breed bans should not be happening. They’re unenforceable, and they’re not supported by the science,” he said. “But anybody who says, ‘Well, what about just really big dogs that can do serious damage?’ — That’s a public health hazard right now!”

“There’s no question a larger dog, and particularly a broad-headed dog,” Ha said, “can do more damage when it does bite.”

Rather than breed bans, Ha suggested size-based restrictions, which he described as a fairer and more workable way to limit the risk of dangerous dogs. But rather than the 25- or 35-pound limits at King County and Seattle housing authorities, he advised caps starting around 80 pounds.

A pit mix dog stands facing the camera.
Another shot of Felicia.
A better solution, he said, would be to have an animal behavior expert evaluate each would-be tenant’s dog during the application process.

“Every pit bull attack you’ve ever heard of had a warning; they did not do it out of the blue,” he said. In many cases, however, neighbors and other witnesses chose simply to avoid the problem dog rather than report issues to their local animal control department.

There should be public service messages about reporting dangerous dogs, Ha said: “The dog that acts aggressive towards you today may kill somebody tomorrow.”

The lesson, said Morehead, is that judging a dog based on its appearance is a poor substitute for understanding how it was raised and the way it interacts with people and other animals.

“Just like a kid,” he said. “If you don’t raise a kid up with manners and respect and teach it how to use the bathroom, it’s not going to know how to do none of that.”

Ben Adlin is a reporter and editor who grew up in the Pacific Northwest and currently lives on Capitol Hill. He’s covered politics and legal affairs from Seattle and Los Angeles for the past decade.