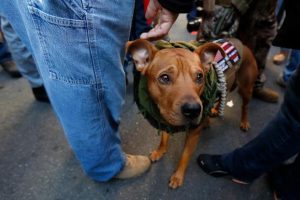 Companions For Heroes, a nonprofit founded by Georgia Senate District 3 Republican candidate David Sharpe, is under investigation by the Georgia Secretary of State’s office.

State officials declined to release details about the investigation other than to say it is ongoing.

Sharpe, CEO of the nonprofit, has given widely varying accounts of the number of pets the nonprofit has saved. Numerous attempts by The News to contact Sharpe for clarification have been unsuccessful, despite multiple assurances he would speak to reporters.

The organization’s mission is to rescue pets that otherwise might be euthanized, train them as companion or service animals and pair them with “active-duty military personnel, military veterans, first responders, military spouses and children and Gold Star Families recovering from the psychological challenges they suffered during service to our country,” according to the Companions For Heroes website.

It also strives to bring awareness to post-traumatic stress disorder, traumatic brain injury and other challenges suffered by veterans and active-duty military personnel.

In a June 2019 Facebook video, Sharpe gave a more modest 512 pets saved. But in October 2019 he claimed at a charity event Companions For Heroes had “helped save over 4,000 lives locally” since the organization’s founding in 2009.

Sharpe could not be reached to clarify the “lives saved” metric. He did not return repeated messages left on his cell phone.

An email request for the company’s most recent audit — which the company advertises on its site as available on demand — returned an automated message saying the company has “helped over 5,000 veterans in the last six years.”

Figures stated by Sharpe are not accurate, according to self-reported data. Companions for Heroes has reported to nonprofit database GuideStar that since 2009 it has paired 634 dogs with veterans.

The organization’s GuideStar profile is linked on the Companions For Heroes’ website, which also sports GuideStar’s 2020 seal of transparency.

While they were self-reported, O’Neal said those numbers are also inaccurate.

“I don’t know where those numbers had come from,” O’Neal said Friday.

She has been working on an internal audit in an attempt to find the exact amount but does not have a figure yet.

Rather than Sharpe, O’Neal said the CEO in place before he took over in 2017 is largely to blame. Sharpe served as the chairman of Companions For Heroes’ board of directors before the board hired him as CEO.

Poor record-keeping was pervasive under the old administration, O’Neal said, and she is working diligently to right the ship.

The charity is not doing anything wrong or immoral and had not in the past, she claimed. The Secretary of State’s office is obliged to investigate citizen complaints against nonprofits, and O’Neal does not believe an investigation into Companions For Heroes will turn up anything illegal.

She admitted that very little from donations went toward veterans programs under the old CEO and more was spent than was necessary. Since she was hired in June 2019, O’Neal said much more of their donations go to the nonprofit’s causes.

As a military spouse with a love of dogs, O’Neal said the charity combines two of the causes she cares about most. As such, she is committed to improving the organization.

“I would not be part of a nonprofit that would waste donors’ money,” O’Neal said.