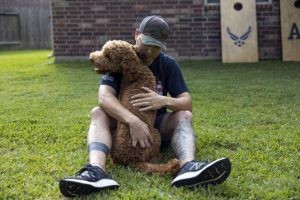 Initially, Will Rollins declined an offer for an emotional support dog. The 37-year-old former U.S. Marine sergeant who fought in Operation Iraqi Freedom’s early years and in Afghanistan, thought he had finally curbed the depression he had endured since leaving the service 10 years ago.

After reconsidering, Rollins took in a puppy gifted to him by the nonprofit Easter Seals of Greater Houston. The lives of Rollins, his wife and his 9-year-old daughter shine brighter ever since he was paired up with a rambunctious red Australian Labradoodle named Andy. The dog’s “been a blessing not only just for me but for my family also,” said Rollins, who is a Montgomery County Sheriff’s detective. Andy “loves to make me and my family happy.” Despite hiccups in training due to stay-at-home orders brought on by the coronavirus, Andy earned his service dog vest after he and Rollins completed the certification test with a perfect score earlier this month.

Settling into civilian life was not easy for Rollins. He divorced his first wife and ended up living alone in an apartment as his post-traumatic stress disorder began taking over.

“I let my post-traumatic stress not ruin me, but control me,” he said. “Not living as the man I should have been living.”

After help from friends and counseling, Rollins was able to overcome many of his struggles. He simply did not see a big need for an emotional support dog.

But he went ahead and took Andy in. Rollins, who has a demanding job on the sheriff’s office auto task force, soon realized just how much he needed the pooch.

When Rollins comes home, The ever ebullient Andy approaches him to be petted. Andy does the same with friends who come visit too, picking up on their stress and helping them forget their worries.

“He automatically puts everybody in a good mood,” Rollins sad. “That’s just his personality.”

Rollins and his wife, Emily, in January 2019 made the drive from their Montgomery County home to Tennessee to pick up Andy as a 9-week-old pup.

Man and canine were paired up by the Houston nonprofit My Service Dog, Inc., an Easter Seals partner organization, which trains dogs to serve people with PTSD, autism, seizures or who are quadriplegic.

Allie Keaton, founder of My Service Dog, matched the two based on Rollins’ personality, lifestyle and needs. But intuition, she insists, played the biggest hand in her picking Andy from a litter for Rollins.

As far as training, Will Rollins was “a very quick study,” Keaton said. “That helped to make Andy easier to train because Andy had the ability and the brains and the willingness, but Will had the follow through.”

Once a week during the start of training, Rollins and Andy would go somewhere public so the dog’s natural excitement would temper down some. Then for four months they would train on multiple tasks at a store parking lot.

As Andy progressed, sessions shifted to every other week. Andy’s big day to test for certification was postponed from February after the COVID-19 outbreak.

Finally on May 3, Andy completed the half-hour test consisting of 25 tasks including following command, staying under a table at a restaurant and accepting strangers approaching him. Andy was graded on three levels: passing, need work, or fail. He excelled on each task.

For more than 70 years, Easter Seals of Greater Houston has been helping people with disabilities and their families in the area. It officially affiliated with the national organization in 2011.

They have provided about 25 service and therapy dogs to military veterans, paying $25,000 for the cost of the canine, veterinarian bills and training, according to Easter Seals Development Director Kelly Klein.

The organization aims to be of service to not only veterans in need, but also to their families. Klein said the Easter Seals of Greater Houston helped 1,700 veterans and their families last year alone.

A coping and comfort dog like Andy, Klein said, helps Rollins be of greater service to Montgomery County as an officer of the law.

The COVID-19 pandemic’s impact on the economic well-being of many veterans makes helping them the more urgent, Klein said.

“Times like this, it is really of upmost importance that we have donors out there who want to support these programs for these veterans,” she said. “They served our country and they deserve to be well taken care of.”

When he is not running around the Rollins’ house and playing fetch, Andy regularly rides with Will Rollins in his red 1987 Chevy Blazer. As Rollins drives through Montgomery County, the 50-pound pooch comfortably sits as a seat-belted passenger with the wind blowing on his face like any other happy dog.

Having earned his service vest, by federal law this dog can now accompany his human dad wherever he goes. And for Rollins, a Cleveland native who grew up with a variety of dogs, that makes him all the happier.

“He is the most caring, sweetest, wonderful dog that I’ve ever had,” he said of Andy.