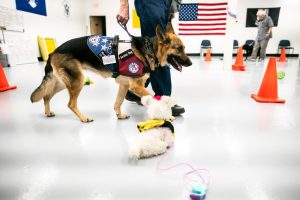 The Puppies Assisting Wounded Servicemembers for Veterans Therapy Act — PAWS — requires the Department of Veterans Affairs to establish a five-year program to provide service dogs and training to veterans with PTSD.

A co-sponsor of the bill, Rep. Mikie Sherrill, D-N.J., a Navy veteran, was at the White House for the signing. She said in a tweet that similar programs have shown “great results” with veterans and that “we want to give that access to even more people.”

She said the signing was “the culmination of years of hard work to bolster services to address our veterans’ mental and physical health from so many people.”

Rory Diamond, CEO of K9s For Warriors, a nonprofit organization in Florida that provides service dogs to veterans, commended the White House for its support for the bill, which was passed with overwhelming bipartisan support this year. Diamond said it was “a critical step in combating veteran suicide.”

Schools become political ‘battlefield’ in culture wars Trump cultivated
From 2005 to 2018, nearly 90,000 veterans died by suicide, according to the most recent report from the VA.

As many as 20 of 100 veterans from the Iraq and Afghanistan conflicts have PTSD, according to the VA. The coronavirus pandemic has caused even more stress for veterans, with calls to the veterans crisis line surging by more than 15 percent last year. And experts agree that PTSD is underreported.