Benson Bringing Love To Others 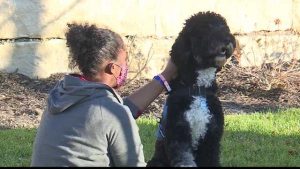 The Ronald McDonald House in Kansas City has a new friend to try and give love and support to those who need it.

“It’s been a long road,” said Marquisha Reed, who has a child at Children’s Mercy Hospital.

Her 6-month-old son, Ezra, just had his second heart surgery. With her other two children at home in Wichita, Reed has spent more than a month at the Ronald McDonald House in Kansas City alone. That’s where pup Benson comes in.

“It is a stress relief to be able to just sit relax and play with the puppy,” Reed said.

The Ronald McDonald House recently added the fully trained service dog just to hang out and comfort more than 87 families who are currently staying there.

“Provide some comfort, some playfulness, some love when you need it most,” said Tami Greenberg, CEO of the Ronald McDonald House Kansas City.

“We can’t give a mom a hug after having a horrible day at the hospital, so Benson gets to do that for us,” said dog handler Kelley Van Towle.

Benson is a 2-year-old burner-doodle who has a job that is all about love.

“They’re here because their child is seriously ill and they need extra love, extra support sometimes the kind that no human can give,” Greenberg said.

“There’s like very limited physical contact with anybody so when you need a hug and you don’t have anyone there, it’s great to have something,” Reed said.

Ronald McDonald House says the families can walk or play with the dog.

Benson is replacing a longtime house pet but he’s the first fully trained service dog at the home.