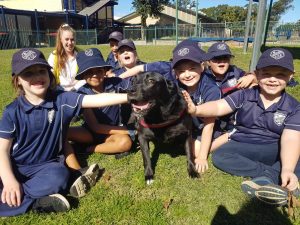 Students and teachers are celebrating the benefits of having a full-time canine in the classroom after assistance dog, Pepper, started at Wauchope Public School this year.

The lovable five-year-old pooch now acts as a four-legged teachers’ aide to calm anxious students, assist with reading by listening and act as writing inspiration.

“She hangs out with us and kids may need her for any calm down time or as a special treat to have time with her,” she said.

“We are still in the learning phase but kids can interact with her and it’s increased attendance for some students. Sometimes kids will read stories to her or write about her.

“She has done some dog training and was one of the dogs who was in the W.A.G.S course in November last year.

“She’s a wellbeing dog and if students are anxious they can have time with her to reduce their anxiety. Students without pets have the opportunity to look after her, to brush her. She is also available for the staff to pat as well.

“For a long time I’ve thought there is a need of this for supported learning. Although it’s not something you’ll find in every school, it is a very easy way to implement a positive change in student behaviour.”

“When I read to Pepper she sits there and listens.”

Assistance Dogs Australia CEO Richard Lord said there is an increase in the awareness of the benefits of therapy dogs in schools.

“We’ve been organising therapy dogs at schools for about seven or eight years now,” he said.

“It’s up to schools to get interested in it and more do seem to be interested when they see the results from other schools.

“The dogs can provide support to students in a number of ways, including offering emotional support, recognising signs of anxiety, and helping improve concentration and communication skills as well as reducing the incidence of antisocial behaviour and bullying.

“We have placed 18 working dogs in NSW north coast for people living with PTSD, families with kids with utism and those who require a wheelchair for mobility. We have 150 dogs working across Australia

“It’s not just bringing a dog into a classroom. It’s about having a trained therapy dog through a certified provider to cover the duty of care to the kids, the school and the dog itself.