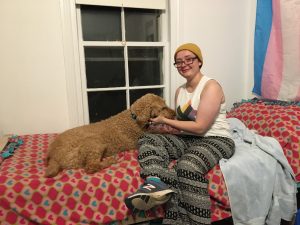 Scarlet is precocious. At just 12 years old, she’s four months into her first year at the University. She has curly, sandy-colored hair, loves her roommate, K Stiefel ’20, and lives in the Pink House at 99 Alexander Street.

Scarlet provides Stiefel with unconditional love and helps to structure their day. The responsibility of caring for an animal means Stiefel has to care for themself, whether that means going for a midday walk or taking a break from work to give Scarlet some attention.

Scarlet and Stiefel aren’t the only interspecies roommates on campus. The Office of Disability Services approves ESAs for select students in order to “mitigate the impact of the disability which can help the student to better navigate their academic and social settings,” Director Liz Erickson wrote in an email. The number of campus ESAs is unclear; approved students sometimes opt to leave their animals at home.

“I literally cannot express enough how helpful it’s been to have him,” said Ann Webb ’22, who lives with Scout, her seven-month-old feline ESA. “It’s so nice to have that source of joy and love and comfort that you just know is going to be there anytime.”

Most students with ESAs have either a dog or a cat, and students are free to live in any dormitory building on campus, provided that any roommates also agree to having an ESA. To qualify for an ESA, a student must provide documentation of a disability and an addendum document from a treating therapist or other medical professional that establishes why the animal is a necessary part of the student’s treatment protocol and how they would benefit from the opportunity.

If the Office of Disability Services approves the request, the Office of the Dean of Undergraduate Students requires proof of the animal’s vaccinations and sets out the requirements and responsibilities of having an animal on campus. For instance, ESAs are not allowed in public University buildings or spaces. Students must return to their rooms throughout the day to provide their animals with adequate care and attention.

For both Stiefel and Webb, the application process proved simple and straightforward. The task of caring for an animal on campus can prove less so.

Students with dogs, like Stiefel, visit their rooms as many as five times a day to walk their animals.

For Webb, caring for Scout has been simplified by having three other roommates. When Webb is busy with extracurriculars, knowing that Scout has companionship puts her mind at ease.

Scout has full roam of the two bedrooms and common room of Webb’s quad. Friendly and affectionate, he often jumps up into beds — any beds — at night to cuddle, and he is well-known among Webb’s friends.

“I remember at the beginning of the year, sometimes I would just forget that we had a cat living in the room, and I just woke up with a warm body next to me,” said Rayyan Sarker ’22, Webb’s roommate. “Every day I wake up, and I get re-surprised that, in a college dorm, I have the opportunity to spend time with another animal.”

Scout’s presence has had a tangible impact not just on Webb, but also on her roommates. He provides a homey atmosphere — the residents of the quad enjoy relaxing with him in the evenings and taking him for walks when the weather is warm — and a sense of excitement.

“It’s funny because people will, like, knock on our door and be, like, ‘Oh, I just came to hang out with the cat,’” Webb said. “He’s famous. He definitely gets tons of love and affection.”

“Sometimes it’s so easy to forget … [that] we’re always so busy running around, doing things on campus, and a lot of the time coming back to our room just meant going to bed,” she explained. “It’s nice to have someone else or something else that we all can sit with [and] play with, and it makes our room more lively in general when he’s running around.”

Having an ESA on campus is a new experience for both Stiefel and Webb this year. Both of them have noticed positive changes in their lives.

For Webb, the support Scout brings helps her navigate anxiety and any other mental health concerns, making it easier for her to function.

“I think it’s something that creates more equity for students who have disabilities or any kind of mental illness — to have this support system is incredibly, incredibly helpful,” she said.

The responsibility of caring for Scarlet means Stiefel commits to being back in their room at 10:30 p.m. and taking more breaks — a healthy necessity for both of them. But as much as Stiefel takes care of Scarlet, they insist that Scarlet takes care of them.

“When I’m really stressed out or I’m having a bad day emotionally,” said Stiefel, “I can just hang out with her for a little bit, especially given that sometimes I have trouble interacting with people. Having a dog where there’s no expectation of having to be social but I can still get that nice contact. That oxytocin flowing has been amazing.”